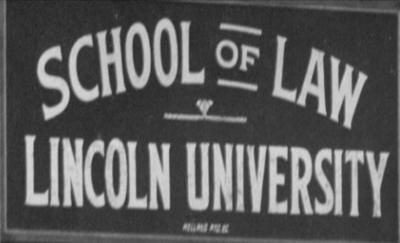 Another dilemma also had to be dealt with; Lloyd Gaines was determined to attend law school, not just anywhere but at the University of Missouri.

Shortly after the Supreme Court decision, Lloyd Gaines left his civil service job in Michigan and returned home to St. Louis, arriving on New Year’s Eve, 1938. In the meantime, to pay his bills, he took a job as a filling station attendant.

On January 9, 1939, Gaines spoke to the St. Louis chapter of the NAACP. He told them he stood “ready, willing, and able to enroll at MU.” Gaines later quit his gas station job. He explained to his family that the station owner substituted inferior gas and that he could not, in good conscience, continue to work there.

In the meantime, the state Supreme Court sent the Gaines case back to Boone County to determine whether the new law school at Lincoln would comply with the US Supreme Court’s requirement of “substantial equality.”